When Tennessee Titans quarterback Marcus Mariota steps onto the field Thursday, he’ll be wearing shoes with a decidedly local flare.

Mariota selected cleats designed by King’s Way Christian students Olive Mohammadi and Sarah Turcic to wear in the Titans’ game on Thursday as a part of the NFL’s “My Cause, My Cleats” week, which allows players to wear custom cleats that bring awareness to a charity and cause instead of the standard team-issued cleats.

The cleats — Nike Vapor Untouchable Pro 3s — will be auctioned off after the game and proceeds will go to toward the ALS Development Institute, a nonprofit seeking to discover a cure.

King’s Way art teacher Justin Tigner is a career artist who has done work for various sports figures, foundations and organizations over the course of 20 years.

Tigner painted a pair of Jordan sneakers to honor Mariota last summer, and posted a picture of them to social media, where Mariota’s Motiv8 Foundation took notice, asked for a pair to auction off at a charity event next summer and commissioned cleats to be designed by Tigner for the Titans’ week 7 game in London.

Initially, Tigner and the foundation were in talks for him to design the shoes in early September, but according to Tigner, Mariota’s mother offered up the idea of having a student contest.

Tigner announced the contest at King’s Way’s homecoming assembly in mid-August. Five student designs, drawn on a paper outline of the shoes, were chosen by Mariota’s parents, Tigner and the foundation, out of more than 50 entries.

“It’s a ridiculous opportunity for a 200-kid high school in Southwest Washington to design an NFL player’s cleats,” Tigner said.

Those five students — Seth Woody, Abigail Horch, Aurora Steenberg, Turcic and Mohammadi — then had two weeks to paint and heat seal the shoes. From there, the finalists were sent to Tennessee where Mariota chose two: one, Turcic’s design, for warmups and the other, Mohammadi’s for the game.

Both hoped to honor Mariota’s roots with their designs.

“I was thinking of green things to do, (forest-like),” Mohammadi said. “I wanted it to represent the gorgeous flowers of Hawaii and where he came from.”

Her cleat design features an assortment of flowers and vines in different shades of green and pink. Turcic’s includes the Koolau Mountain range of Honolulu, Mariota’s birthplace, on one side, then evergreen trees and clouds on the other side, a nod to his time spent in Eugene, Ore. at the University of Oregon. Both feature the ALS Development Institute logo.

Turcic also included the Bible verse Psalms 17:5, which reads “My feet have not slipped … my steps have held fast to your path,” which Turcic chose after hearing Mariota is a Christian.

“He’s famous for being a football player, he’s stayed to the path of helping people and donating all this money to the ALS foundation,” Turcic said. “He’s stuck to the path.”

Tigner’s teaches a shoe design class as an art elective at King’s Way, though neither Mohammadi or Turcic are in that class.

Nike sent boxes of the white size 13 shoes, and it was up to Tigner to strip several layers of protective coating by hand with sandpaper, so the acrylic-based shoe paint would stick.

“Basically destroy the cleat down to the raw material before you can use the paint and apply the heat to it to get it to bind,” Tigner said. “I’m grinding away on $200 cleats with sandpaper.”

The students then painted and heat-sealed the cleats with a heat gun.

“We would paint a layer and use a heat gun” which gets to well over 300 degrees, Turcic said. “It’s painting, then heat, painting then heat, over and over.”

The game-worn cleats will be auctioned off after the game on the NFL’s website. The cleats worn during warmups, along with the other three finalists, will be donated to charities, according to the news station KHON- 2 in Honolulu, Hawaii.

Mohammadi plans to watch the Thursday Night Football game, which will be televised on FOX at 5:20 p.m., with her immediate and extended family — “they’re all excited,” Mohammadi said. Turcic said her parents taped the game. Both expressed shock that their work will be viewed by an audience in the millions.

According to Tigner, Mariota will sign each pair of cleats before they are auctioned off.

“Once we get to see how much these are getting auctioned off for and how much that will help (the foundation), that will be a really cool thing to see,” Turcic said.

Mariota opted to support an ALS-centered nonprofit because of a friend from University of Oregon, Osiel Mendoza, who was diagnosed with ALS at 21 years old, according to the NFL’s website. There is no known cure for ALS, which is also known as Lou Gehrig’s disease.

Last season, Mariota’s shoes in My Cause, My Cleats week were auctioned off and proceeds went toward Habitat for Humanity. 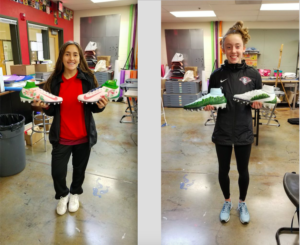